Ondřej Vostatek has devoted motorcycle sport since he was 6 years old and he has placed medal positions from the beginning. He´s currently the best rider in Mini Moto Junior A category in Czech Republic and in his first start on ME 2012 in Spain occupied 4th place. In season 2012 he first time raced with Honda NSF 100 not only in series of Czech International Championship but also in prestigious Germany cup ADAC Mini Bike Cup that is entry gate for young riders that aim to World Championship in the future. As seven years old and the youngest rider of german cup he was able to struggle on first positions in the end of season and also increase his competiti-veness to much older rivals.

In 2013 he won the Czech Championship in Mini GP 50 category and became Champion of Germany ADAC Mini Bike Cup in "Einsteigerklasse" category.

In 2014, Ondřej went in the German championship ADAC Mini Bike Cup in the category of advanced riders (Nachwuchs) and as the youngest rider in the overall standings 4th place. The first time he participated in the European Championships in the category 50 Mini GP and Spanish Championship Cuna de Campeones.

In 2015, Ondřej Vostatek won a phenomenal 11 wins in the German championship ADAC Mini Bike Cup and became champions Germany in 2015. This year also fought in Italy and Holland and he became European Champion in the category of Honda NSF 100. First time he participated in the Spanish CEV championship in the category Challenge 80, where he won the best 4th place in the category Moto 4 on the new bike Beon able to compete with the Spanish riders and on the track in Valencia fought podium. Eventually he won the best sixth place, while third place behind Valencia region. In the championship Cuna de Campeones in mini GP 140 is permanently affixing the top ten, but thanks to the transition to the big road, this championship has finished.

In 2016, Ondřej Vostatek moved to big circles. The Spanish CEV Championship again took part in the Moto 4 category. At the beginning of the championship he took fourth place in the qualification in Albacete, made the fastest lap of the race and the race finished in 6th place. At the second race in Jerez he took second place in the qualifying and started for the first time in the first row. He finished fifth in the race. Then the wound followed, and the well-run season for him prematurely ended. At the end of the season, Ondřej returned to racing and finished the season in the 9th place.

In 2017, Ondřej co-operates with the new ETG team and moves into the Pre-Moto3 category and for the first time he will participate in FIM CEV Repsol in the European Talent Cup on the Honda NSF 250. In the middle of the season, the team was changed to Pre-Moto3. With the new Igax Team, Ondřej scored his best season at the last Jerez race and won a trophy for third place. At FIM CEV Repsol he continued with ETG Racing, where he was continuously placed on positions with points. Ondřej was best placed in sixth place in the championship.

In 2018, Ondřej continued the CEV championship, where he fought for a victory in each race and was placed in the Top Five. His big accomplishment happened in Albacete, where he won second place. In the heavily occupied FIM Championship Repsol, in the ETC category, he was best placed on the seventh spot and successfully ranked among the best Top Ten European riders.

In 2019, he continues to work with the IGAX team and will host the Junior Moto3 World Championship.

In 2020, he continues with ASPAR Team in Moto3 category. The season was disrupted by pandemic of Covid - 19. Ondrej also grew up. However, he was still able to fight and earn points.

In 2021, he starts in Supersports - highter category, which races with Moto2 category in FIM CEV Repsol and Championship of Spain. In Championship of Spain, he was placed on podium with Czech team and through the season was constantly in Top 10. He got chance to step on the podium six times in category Superstock 600. Ondřej also got a Wild card to race at the World SBK and earned his first points, in category World Supersport, at the age of sixteen.

In 2022, Ondřej will become the third Czech rider in history to race in The World Championship of Superbikes and he will proudly represent Czech Republic in category World Supersport. 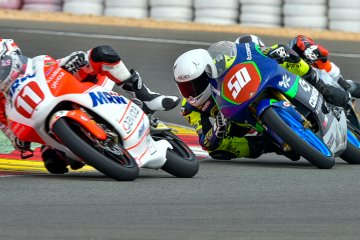