On 18 May 2019 at the Le Mans Moto GP Circuit, more races had taken place as a part of the FIM CEV Repsol Junior World Championship. This year, the Czech racer Ondřej Vostatek got his first taste of this technically demanding circuit, as well as the great atmosphere of Grand Prix.

“Our programme was cut really short due to the crammed programme of Moto GP. We arrived on Thursday and only got to have look at the circuit once for half and hour. This was the first time I’ve seen the Le Mans with my own eyes; it was completely unlike when I was checking it out on my Playstation. It is a very technical circuit with many horizons and limited front view, not to mention very specific and differently tilted corners. This meant the team and I had started completely in the dark. We had arranged for Jakub Kornfeil to give us a tour through the track, but that got called off because he was preparing for his own race with his coach rider Talmachi. I ended up being given quite a few pieces of advice by Filip Salač, whom I’d like to take this opportunity to thank.”

“Also compared to the traditional programme, we only had two 50 minute draining sessions, which were also the qualifiers. It was more than a kilometre to the pit lane from out makeshift pit, where the team and I had to load all the tools and equipment and move to the pit lane. This cost us some time, leaving very little for adjustments during the training. Compared to us, the teams and racers who have already raced here had a big advantage and far better knowledge on how to adjust the bikes to suit this particular track. Additionally, the weather was all over the place, so we didn’t know whether it’s going to be the dry or the wet variant until the last moment. The first qualifier was driven on a dry track at warm weather, but it got cold for the second one. The whole track was beautiful, but very difficult. The first qualifier was about getting to know the track a little bit. In the second one, the driving wasn’t getting any faster and i had to accept the 31st starting position.”

“We have been dealing with this since the beginning of the season – with losing speed at starts, where my opponents have been leaving me behind from the slipstream, which is why my team has decided to test a new 2018 bike update, especially the air box, which my bike doesn’t have and most of my opponents use it.” It’s going to take a while before it gets fine-tuned.”

“It was raining at the day of the race, so we put the wet tyres on. ¨The warm-up was looking good, I was around the 20th place. I had a good start in the race and managed to gain about ten positions. But the rain stopped at the time of the start already and the track started getting dry very quickly. About four laps in, my rear tyre started tearing up. Despite that, I was trying my hardest to keep the tempo up. I was improving my time and pushed the tyre to the limit. My fastest lap was at the end of the race – the tyre was completely destroyed at that point.”

“Unfortunately, I didn’t manage to do the race the way I imagined and I’m really disappointed about it now, but I’m glad I even finished the race to begin with. Other than that, the atmosphere was great and I’m looking forward to further races, which will hopefully turn out a bit better.“ said Ondřej Vostatek in conclusion. 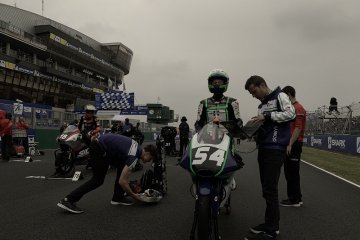