ONDŘEJ VOSTATEK ENDS THE SEASON IN NINTH POSITION AT VALENCIA

Over the weekend of 24–25 November 2018, the FIM CEV Repsol Junior World Championship Series season closed in Valencia. In the last emotion-loaded race in the European Talent Cup category, Ondřej Vostatek fought his way into the leading group, battling for victory and ending the season in ninth position after a tough battle.

During the qualification session on Saturday, the track was dry with isolated wet patches. Thanks to the large number of entrants, two groups entered the qualification session. Ondřej Vostatek was in the first group, A, which took to the track relatively early in the morning when temperatures dropped below 10 degrees. The second group, B, had a slight advantage in the form of better conditions, as the track had already completely dried and the air temperature had risen. Ondřej took off in the first qualification session and encountered technical problems from the outset. After four pit stops, he was compelled to end the qualification race prematurely and the team decided to change the complete engine and electronics for the second qualification race. After the engine change, Ondřej had the seventh-best group time in the second qualification race. In the final count, he got the eleventh-best time of the 52 competitors. During the setup of the starting grid using the zip method from groups A and B, Ondřej ended up in fourteenth place so that even drivers with worse qualification times were in front of him.

The warmup was on Sunday just before the race and took place in the cold morning weather. Ondřej had the task of saving the equipment for the race and avoiding unnecessary risks presented by the character of and conditions on the track. The race started under better weather conditions, but it was windy. Ondřej lost several positions after starting, but got them back during the first lap. The leading group made an effort to increase the lead after the first few laps, but Ondřej continuously increased his pace and caught up with the first group. The rider behind him subsequently had an accident and the race was stopped with a red flag. After restarting, Ondřej found himself in the eleventh position and immediately got into the leading group in the first sector at ninth position. The race was set for only 5 laps so the battle for every position was very tough from the outset. In the last lap, Ondřej came nicely out of the last bend and took eighth position on the home stretch. In the end, however, he was overtaken by the Spanish Salvador from the slip stream who pushed our rider to ninth position.

After the races, Jan Vostatek said:

"On my opinion, we coped well with the last races of the season. This year's Talent Cup had very good competitors and it was very difficult to get a good position in it. The winner was decided in the last race, such that it was a breathtaking battle with an excellent atmosphere. Ondra was fifteenth overall in the championship, but was more or less in the Top Ten during the entire season! He was capable of beating and leaving most of the current and new Red Bull Rookies Cup riders behind him. This is a clear signal for us to continue and move a step ahead. We would like to enter the Moto3 Junior World Championship category, so the season has not actually ended for us. We have a lot of work ahead of us so that we will be best prepared for the 2019 season. In conclusion, I would like to extend my thanks to our team Igax for the excellent work and approach, which we highly appreciate. Furthermore. we appreciate the support of all our partners and sponsors, namely Compos Distribution, Network Support, Psi Hubík, Shark, Tyrex, and Autoklub ČR. Thank you very much and we look forward to the next season," Jan Vostatek said in conclusion. 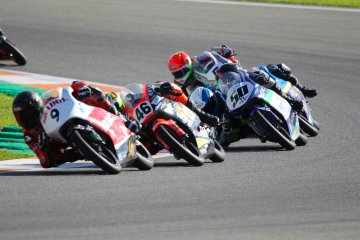