Talented rider Ondřej Vostatek has signed a lucrative contract opening the path to his dream, the MotoGP World Championship. He has joined the top-class Aspar Team, which is owned by one of the most popular personalities in the championship - Jorge Martinez "Aspar". He noticed the Czech rider at the Spanish "championship", where Ondřej really caught his attention with his performances last year.

The great motivation for the transfer to a new team are the connections and having one's own team in the world championship, which we know as the MotoGP. After last year's good season in Southern Europe, an offer came from the TOP team, but the offer from the Aspar Team (which was last year still known as the Angel Nieto Team junior) simply could not be denied.

"It is great news not only for us but also for the Czech Republic. Ondřej will get a chance to show his skills in a top environment. I believe that it will be interesting for the Czech Federation, other sports organisations, and also for potential sponsors to whom we can offer interesting media space thanks to this team. It is simply a step in the right direction, which can fundamentally and positively influence Ondřej's career," says Jan Vostatek, the rider's father and manager in one. He will now meticulously plan the 2020 Season.

Ondřej Vostatek and his team-mate shall form the youngest pair in the starting field, although they have great expectations from this. From next season, he will be backed by the Aspar Team - a giant with a rich history. This team has been active at the top motorcycle level for 30 years already, during which it has won 13 titles in the world championships. For Ondřej, who first sat on a motorcycle at the age of 6, this is a great opportunity for him to get closer to his dream MotoGP. The contract was signed during the last Grand Prix on the Motorland Aragon Circuit.

"The Angel Nieto Team junior is an important part of our structure thanks to which we are continuing with the training of talented racers and with us they have a real chance to make it to the motorcycle world championship. Ondřej is an example of this. He joined us with ambitions to continue growing, which we believe he shall prove in the second half of the Moto3 junior world championship. We are glad that he is here with us and we hope that we can create conditions to enable him to fulfil his high targets in 2020," said Spanish team owner Jorge Martínez "Aspar".

Ex-rider Lukáš Pešek is also supervising his development: "It is excellent that Ondřej has joined a team like Aspar. In the time when I was active, it was already a fantastic team at the highest possible level. Something like Barcelona in football. And the fact that Ondřej has signed up with their junior team has opened the doors to the big world for him. It is now up to him; the results he gets will decide the direction of his career. I believe that a good season is ahead of him in the professional team, which shall move him a bit closer to the MotoGP Championship."

The talented rider's world has turned upside down. Moreover, he must get accustomed to a foreign environment, which he encountered during last year's season but he knows that he has space for improvement. He has the base, but another thing in the pipeline is study at an English-Spanish School. A life trial without his parents awaits him. For the record - in the Aspar Team, unlike in other teams, the parents are banned from entering the pit stops.

"The Contract with the Aspar Team is a dream come true. He has a lot of experience with Moto3 and owns a MotoGP World Championship Team. I know that my performance can further improve with their data and experience. I will also have a lot of quality material available. With such a force behind me, the road to my MotoGP World Championship dream is becoming more of a reality," says the fifteen-year-old hopeful, who is elated at this offer. 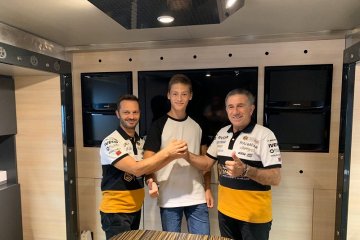